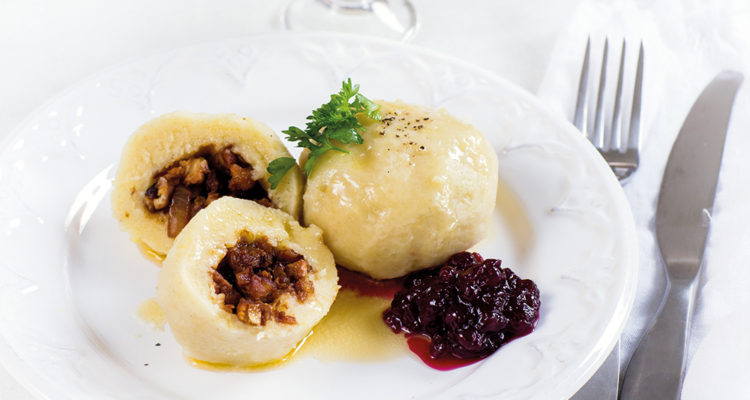 KROPPKAKOR (as written by Grandma)

Use the potato water to make Rye bread. Mix dough well and form balls, (Grandma made 5-6” balls) making a hole in the middle. Fill hole with browned (in butter) chopped salt pork, finely chopped onion and ground allspice. Cook in salted water very slowly….simmering about 1-1 1\2 hours. Balls will rise to the top of water when done. Left over Kroppkakor were sliced and fried in butter and served with a light cream gravy.

Grease a good sized casserole. Layer potatoes, onions, anchovies, and pepper, ending with potatoes. Pour milk over, cover, and bake 400 degrees for 30 minutes. Uncover and bake 30 minutes more or until potatoes are done.

From the kitchen of my Great Auntie Melvina Larsson from Kristine Guthrie.

Buy medium casings and don't fill them to full, only so they lay flat when pressed down. Fill. Stick with needle before cooking. Cook about 1 hr in boiling water and boil slow. No cover.

copied it for you just as she wrote it.

all names for this recipe:

to fry: butter or fat

Beat egg and a little of the milk, then add flour and remaining milk alternately while beating. Allow to stand two hours (for flour to swell).

Heat griddle or frying pan and butter. Cover with a thin layer of batter.

When browned on both sides place on hot platter. Serve immediately with

Since someone asked, I have waited for the “proper” recipe for potato sausage

(potatis korv) to appear on this list, but have exhausted my patience. I must now give you MY recipe. (I absolve my parents, grandparents, and all other Swedish relatives from any blame - this is MY interpretation of what I saw [and helped with, and even did myself] so many times.)

Quantities depend on the size of the family - this recipe reflects the proportions and can be increased as far as necessary.

love (whatever you can spare)

casing thoroughly (especially if it has been preserved in salt). Using a meat grinder with a horn, fill the casing about 2/3 full. Put the filled

casing in water immediately so potatoes do not turn black. Boil in enough water to cover for about one hour. Add water as necessary. Serve with boiled potatoes, lutefisk in white sauce, and any other cholesterol rich foods that are at hand and are popular with your family.

Tips: Meat and non-meat should be about equal proportions.

Pork rounds tend to be more sturdy than beef rounds for the casing.

Mixture will swell considerably during cooking, do not overfill the casing.

If done properly, everyone will overeat. Mixture continues to swell after eating - caution - magic properties.

Mom said it took an hour to make, an hour to cook, and an hour to eat. I find it takes a lot longer to make than to eat. (And even longer to

digest - but I still love it.) Some folks insist on ketchup - but then they eat ketchup on everything.

Another approach is to go to a grocery store in Ironwood, MI, and just buy some. It will not be the same to those who have had homemade, but it's OK and a lot easier (this really need ketchup). Enjoy! Next week if you are still interested I'll tell you how to make North Woods pasties!

Thanks for the memories!

Nancy Peter, this recipe came from my grandmother.

I have fond memories of “potato bologna” mostly around the holidays. We always bought or made it starting at Thanksgiving and ending at Easter. My grandparents lived in Axtell, Nebraska. The grocery stores in Kearney always stocked it during the holidays. My grandparents would make it to suit their fancy some years. I remember them borrowing a sausage stuffer and making it in the kitchen one year. My parents also carried on the tradition. It is the only Swedish dish I ever remember being served in our family. I have also made this but with the smaller families, it is too much for us to eat. This is the recipe my grandmother used. She always like hers the best and all “bought” sausage was measured next to hers.

Mix all together and stuff in casings. My grandmother boiled the sausage, then fried in butter in a skillet. You don't want the leanest meat otherwise the sausage will be very dry. I cut the recipe in half but it still makes quite a bit.

Can be frozen. We have also made it into patties and fried it.

from my grandmother on the island of Oland

2 cups flour or enough to make a stiff dough

of black pepper or ham. Boil potatoes in salted water

until tender. Mash. Put in refrigerator until cold. Finely chop or grind (Food processor for us modern folk!) salt pork, Spam, ham or pork chops, add seasonings. To cold mashed potatoes, add eggs, mix well. Add enough flour to make a stiff dough. Divide dough into 16 portions. Form each portion into ball, flatten the ball and place approximately one teaspoon of the meat mixture and fold the dough around it sealing it well, press into a thick patty.

Cook in a large pot of boiling salted water for about 15 minutes or until they raise to the top. Eat hot, or refrigerate and heat up in a frying pan with butter the next day. (These freeze well too!) I think she might mean Öländska Kroppkakor (Öland Potato Dumplings) which

are different to Klimp, the Swedish name for dumplings. The Klimp recipe I

have is just made with flour, eggs, butter, milk, sugar and flavored with almonds or cardamon.

Peel raw potatoes and grate. Place in sieve held over a bowl. Allow to stand. Pour out water, reserving thick part at bottom of bowl. Add the

rest of the ingredients. Season to taste. Work dough until well blended.

Sauté onions and salt pork until onion is soft and pork is slightly colored.

Add allspice and set aside to cool slightly.

Take a piece of dough the size of a large meatball and make a smooth ball. Make a hollow in the centre and fill with a spoonful of the pork mixture,

sealing thoroughly. Dumplings should be smooth and round, without any cracks, and about the size of 2” in diameter, fitting snugly in your cupped

Cook for 1/2-3/4 of an hour in plenty of salted water (1 tsp salt per quart of water). It should be at least 3” deep and avoid over-crowding the pot.

Lift out with a slotted spoon and drain well. Serve on a hot platter and drizzle with melted butter. Lingonsylt is wonderful with this. You can

also fry left-over kroppkakor in butter and serve them the next day (I like them even better like this).

My husband and son fell in love with this recipe when we visited my father in Kalmar. They always complain that I don't make it often enough, but it

Here is another, very old, and typical Swedish dish. It is not a fancy dish, its origin is from poor people in the countryside some centuries ago.

Swedish name Rårakor, pronounced something like “raw-rah-kor” with a rolling, Scottish, r.

Peel and grate very finely raw potatoes. Add a little salt and leave it in room temperature for 10-15 minutes. Stir occasionally to end up with a

In a skillet melt some butter (just to cover the bottom) on low to medium heat. Put your potatoes in, approx a tablespoonful at the time to form small

cakes of about 2 inches width, and fry them abt 2 minutes on each side. They are ready when they are a bit crispy and have a golden color.

This is still a common part of the Swedish kitchen.

Swedish “stekt fläsk” is not exactly like bacon. It should be either salted or smoked, cut in 2-4 mm thick slices and rather hard fried.

If you are “in the money” you can make a fancier variation called “Raggmunk” Peel and grate finely 8 medium sized raw potatoes.

Make a batter of 2 dl wheat flour and 5 dl milk (dl = deciliter). Add some salt and white pepper (not red pepper which is not Swedish).

If you are really rich or preparing for a holiday dinner add one whole egg to the batter BEFORE adding the potatoes.

Add the potato grate to the batter carefully. Just turn it over, don't stir too much. The potatoes should still look like strips.

Fry in a skillet as with the “Rårakor” above and serve the same way. Yummy!